DeMint off to good start as Steering Chairman 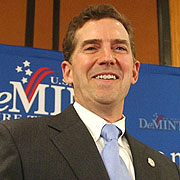 Now, it looks as if Senator Jim DeMint will be doing just the same. As noted last week, DeMint teamed up with Tom Coburn to put the brakes on a raft of porked up appropriations bills despite receiving the predictable criticism from big-spending GOP colleagues on the Appropriations Committee. The Wall Street Journal today has more on that effort:

It’s been years since federal agencies have screamed this loudly about fiscal discipline being imposed on them. GOP Sens. Tom Coburn of Oklahoma and Jim DeMint of South Carolina have decided to take a stand against overspending by objecting to the nearly 10,000 earmarks, or member-sponsored pork projects, larded throughout the spending bills Congress is currently considering.Their obstinacy has convinced the leadership of the departing Republican Congress that they probably won’t be able to pass spending bills in next month’s short lame-duck session. Instead, they are likely to pass a stopgap “continuing resolution,” which will continue funding all programs at last year’s level until the new Democratic Congress passes its own versions of the funding bills.

Mr. Coburn says the decision not to pass earmark-stuffed catchall spending bills could save taxpayers a cool $17 billion. All 10,000 earmarks in the pending bills will expire if they aren’t passed by the end of the year. Mr. Coburn says the decision of the congressional leadership to instead go for a continuing resolution is a sign Republicans are learning some lessons from their stinging loss of Congress three weeks ago. “By either staying home or not voting Republican, many voters were sending a message that they don’t want to give the spending favor factory that Congress had become their stamp of approval,” Mr. Coburn says. “It’s time that message was heeded.”

Nonetheless, the cries of pain are mounting now that it looks as if many federal agencies will have to get by until late January or even later with the same amount of money they got last year. Of the 11 spending bills covering the fiscal year that began on Oct. 1, only those governing defense and homeland security have become law. Appropriators are beside themselves that a continuing resolution that restrains spending is on the table. Rep. Jerry Lewis, who is ending his stint as chairman of the House Appropriations Committee, calls it a “catastrophe.” A spokeswoman for Mr. Lewis’s Senate counterpart, Thad Cochran, says it is “irresponsible.”

It’s not easy to go up against entrenched powerful appropriators, especially when you know you are going to get attacked with every type of distorted argument your pork- addicted opponents (who are many) can come up with.

Judging by these actions, it looks as if the Steering Committee will again be led by a strong fiscal conservative who is willing to buck the status quo.

This entry was posted on Monday, November 27th, 2006 at 11:13 am and is filed under Republicans, pork, conservatives. You can follow any responses to this entry through the RSS 2.0 feed. You can leave a response, or trackback from your own site.