The liberals are coming to town, oh my! 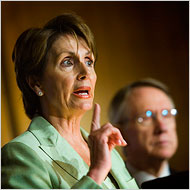 A new Wall Street Journal/NBC News poll foreshadows a disastrous mid-term election for Republicans resulting in liberal control of the House of Representatives for the first time in a dozen years. Indeed, if the polls are to be believed, Democrats led by liberal leaders like Nancy Pelosi, will soon wield power in the nation’s capital.

When and if they wield that power, what will they do? Recently, House Republicans compiled a list of Democrat-supported bills that Republicans have kept bottled up.

“This list of the bills most likely to be championed by committee chairmen in a Pelosi-led House of Representatives would be great fodder for the latenight talk show hosts if it weren’t true,” House Majority Whip Roy Blunt said. Blunt’s right, the liberal list, when taken as a whole, should make even Congress’s most outspoken liberals blush.

Less Jail Time for Selling Crack Cocaine - H.R. 2456: Charlie Rangel (D-NY) and 23 Democratic cosponsors want to eliminate mandatory minimum sentences for possessing, importing, and distributing crack cocaine. John Conyers, the would-be Chairman of the Judiciary Committee, which has jurisdiction over the bill, is a cosponsor.

Taxpayer Funded Abortions & Elimination of all Restrictions on Abortion, Including Parental Notice - H.R. 5151: Jerrold Nadler (D-NY) and 66 Democratic cosponsors want to overturn even minimal restrictions on abortion such as parental notice requirements. The bill would also require taxpayer funding of abortions through the various federal health care programs. John Conyers, the would-be Chairman of Judiciary Committee which has jurisdiction over the bill, is an original cosponsor.

Now, I am under no illusions that should Democrats control the House, this list of liberal legislation will necessarily become law. Certainly, the President would love the opportunity to veto any one of these terrible ideas in the event that it actually reached his desk. But the list does give us a peek into the lifeblood of the liberal caucus that drives the Democratic Party and it is important to note that the above list is only legislation. If liberals retake the House, it is the people themselves running the show who we should be concerned about.

Exhibit A would be the entire crop of liberal committee chairmen.

Charles Rangel and his 94 percent ACLU rating would control the purse string at the Ways and Means Committee. Goodbye free trade, goodbye tax cuts and hello to the return of the Great Society!

John Conyers, a 100 percenter at ACLU and the AFL-CIO, would run the Judiciary Committee. Borders, prepare to be opened, goodbye Patriot Act and Native Hawaiians prepare to be granted the right to secede from the Union.

Rangel and Conyers are to of the best examples, but other would-be committee chairman are equally liberal, if not as notorious.

This scenario only looks at the House, but should the Senate flip, liberals like Patrick Leahy would have a field day destroying the progress conservatives have made with the courts.

UPDATE: The Republican Study Committee has released another list of liberal bills introduced by House Dems that further makes this point. The list is pasted in the extended section (a couple are duplicates), my favorite is the Tupac Shakur legislation!:

Justice for the Unprotected against Sexually Transmitted Infections among the Confined and Exposed Act (JUSTICE) Act (Lee, D-CA)—H.R. 6083. Requires community organizations to be allowed to distribute sexual barrier protection devices (e.g. condoms) in federal prisons. Also prohibits a federal prison from taking adverse action against a prisoner who possesses or uses a sexual barrier protection device.

Antibullying Campaign Act (Nadler, D-NY)—H.R. 3787. Creates a new federal grant program aimed at reducing bullying in public schools “based on any distinguishing characteristic of an individual.”

Gas Stamp Act (McDermott, D-WA)—H.R. 3712. Creates billions of dollars in gas stamps each year for people to get free gas, to be distributed to those already eligible for food stamps.

Ex-Offenders Voting Rights Act (Rangel, D-NY)—H.R. 663. Allows those convicts who are just out of prison to vote.

National Health Insurance Act (Dingell, D-MI)—H.R. 15. Institutes a new 5% value-added tax on property and services and creates a board to oversee payment to any individual for medical services not covered by Medicare.

Freedom of Choice Act (Nadler, D-NY)—H.R. 5151. Creates a right to unrestricted pre-viability abortions, and late terms abortions for the life and health of the mother.

A Living Wage, Jobs for All Act (Lee, D-CA)—H.R. 1050. Builds on and strengthens FDR’s “Economic Bill of Rights,” creating rights to “decent” jobs, income for individuals unable to work, a “decent” living for farmers, freedom from monopolies, “decent” housing, “adequate” health care, Social Security, education, work training, collective bargaining, a safe working environment, information on trends in pollution sources and products and processes that affect the well-being of workers throughout the world, voting, and personal security. The bill also requires the Attorney General to create a registry of all corporations convicted of violating state or federal law.

Health Security for All Americans Act (Baldwin, D-WI)—H.R. 2133. Requires states to create programs to ensure universal health coverage, and allows states to force employers to pay for health insurance for their employees.

Universal National Service Act (Rangel, D-NY)—H.R. 4752. Makes it an obligation of every U.S. citizen, and every other person residing in the U.S., between the ages of 18 and 42, to perform a two-year period of national service, either as a member of an active or reserve component of the armed forces or in a civilian capacity that promotes national defense.

Medicare for All Act (Dingell, D-MI)—H.R. 4683. Increases taxes on workers and employers to offer to all citizens, and other individuals legally present in the U.S., Medicare benefits equivalent to the health care plans federal employees receive.

Menu Education and Labeling Act (DeLauro, D-CT)—H.R. 5563. Regulates what certain restaurants must print on their menus.

This entry was posted on Thursday, October 19th, 2006 at 10:53 am and is filed under Dems, politics, liberals. You can follow any responses to this entry through the RSS 2.0 feed. You can leave a response, or trackback from your own site.

14 Responses to “The liberals are coming to town, oh my!”